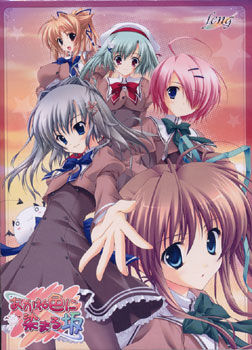 Akaneiro Ni Somaru Saka is a wiki where you can add, share, and discover things about "Akaneiro ni Somaru Saka". You can also share your own knowledge for everyone to enjoy.

Akaneiro ni Somaru Saka (あかね色に染まる坂?, lit. The Hill Dyed Rose Madder), also known in short as Akasaka, is a Japanese adult visual novel developed by Feng and first released for the PC as a DVD on July 27, 2007. A version without adult content was released under the title Akaneiro ni Somaru Saka: Parallel on July 31, 2008 by GN Software for the PlayStation 2. A port of this version of the game was released for the PlayStation Portable on December 17, 2009 under the title Akaneiro ni Somaru Saka: Portable. The gameplay in Akaneiro ni Somaru Saka follows a plot line which offers pre-determined scenarios with courses of interaction, and focuses on the appeal of the six female main characters. Two light novels were produced in December 2007 and February 2008 written by different authors, and an Internet radio show began in April 2008. A manga adaptation began serialization in Kadokawa Shoten's seinen magazine Comp Ace on June 26, 2008 illustrated by Homare Sakazuki. An anime adaptation produced by TNK and directed by Keitaro Motonaga aired in Japan between October and December 2008.

Community content is available under CC-BY-SA unless otherwise noted.
Advertisement